When we talk about Egypt, people think it’s a “Great Oasis” towered with historical pyramids, sphinx and Nile River. Although religion is an essential part of Egypt’s heritage. The landscape of Egyptian worship architecturally stands on the foundation of mosques and churches. Most of the Egyptian worshipping places are in Cairo, that have the labeled with “A town of thousands Minarets”, means to have thousands of worshiping Places in Egypt religion for people. It should not surprise for whom who know the majority of Egyptians are Muslims.

Islam is not the only religion dominating on Egypt but devoted Christians as well as Muslims in country. A huge amount of people in Egypt worship accordingly to their faith and many of them having Coptic faith.

Cairo: A places in Egypt religion of Egyptian worship

Visiting streets of Cairo in Egypt, you can notice many of the religious structures that make foundation of Egyptian worship. Collaborating with local guide can be facilitating to know about the history and intricate the details of such mosques and churches.

Al-Azhar mosque is the centerpiece of Islamic world was built in 972 A.D. This mosque is also the world’s most prestigious Islamic institute and has undergone multiple changes since this mosque is built in Egypt.

This fundamental Islamic monument is constructed by Caliph Al-Mu’izz in the capital city of Egypt and that was the first mosque built in this city. As being the first Egyptian worshipping place Al-Azhar mosque considered the most important Islamic university as well as having a huge amount of students almost 90,000 on per year.

This mosque is famous for its unique Iraqi architectural style and known as the oldest mosque of Cairo stands still with its original form.

This nineteenth century mosque is also famous for its largest Egyptian worship structure. Its wide surrounding courtyard area recalls that it could build to hold every Muslim of this capital.

It is the single remaining monument established by Qata’i built in 870 as Tulunid estate’s capital. It is the rare establishment of European architectural monument admitted the influence of their pointed arch, wall battlements and the pier.

Visitors of Egypt can easily view this mosque in the city of Cairo because of its huge architectural structure. The domes of this mosque are high up to 52 meters and its two sided minarets are more than 84 high on the eastern side of the mosque.

It is also known by the name of “Alabaster mosque”. When you see this mosque you will know why people calls it ‘Alabaster’, its interior and exterior constructor is wondrously coated with alabaster height of 11 meters. Its high domes and minarets make this mosque tremendously calm and wide for peaceful worship.

Red Monastery located nearby Upper Egypt at Souhag and almost a half mile away to the White Monastery in Egypt. This is the Coptic Orthodox monastery which was named after a saint of Egypt named “Pishay”.

It was the heart of the large monastic community of Egypt, built in 5th century. It is the rare example of the colorist intensity of the late antiquity in Egyptian worship. Late antiquity paintings are still covered the 80% of walls of this church. Church is filled with the figures and ornamented paintings.

Monastery of St.Macarius The Great

The monastery of St.Macarius located 92km away from Cairo at western side and lies in Wadi-Natrun on the highway towards Alexandria. It was founded very early in 360 A.D. The monastery is still known by its founder’s name ‘St.Macarius’. It was said that St.Macarius was known as the spiritual father of more than four thousands of monk from all over the world. Though, since then the monastery has been exhibited continuously by monks of the present times.

Saint Catherine’s Monastery is officially known as the ‘sacred monastery of the God trodden’ lies at the Sinai Peninsula.

It is located at souhern Sinai Governorate and was the oldest monastery which is working continues since that time and steeps in the tradition very uniquely. St.Catherine has its unique part in the religious art and also pay a great part of neglecting the 8-9th centuries destructive iconographic art.

St.Virgin Mary’s Coptic orthodox church is also known as “the hanging church”, “suspended church” or “Al-Moallaqa”, which lies there since 3rd century. You can approach at that church by stairs of twenty-nine steps; most of the Cairo people called this church “the staircase church” too.

The structure was constructed above the southern gate of the Roman Fortress named Babylon fortress. Its nave was suspended over a passage and the wooden roof modeled after Noha’s Ark. If you enter the church, there will be huge Iron Gate at starting point of the street to church. In the later nineteenth century two bell towers built and can be seen from courtyard which was decorated with modern biblical design.

As being A Great Historical place, the houses of Egypt worship also contributing a unique part of this history by having numbers of places in Egypt religion. There are thousands of churches and mosques that are hard to elaborate with words but remain the most attractive part for foreigner tourists. People having love with history or especially families with kids who want to visit Egypt they should also visit Egyptian mosques or churches to uncover and explore the religious site too. 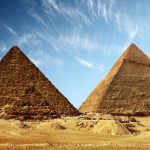 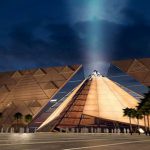