Ancient pyramids impressively structured by humans, still having a mystery for us thinking “what is inside the pyramids

Egyptian pyramids still representing the Egypt’s history, when it was one of the riches countries and having the most powerful civilization around the world. The great pyramids of Giza, are the most magnificent man-made structure in the history and its unique massive scales are reflection of the Great pharaohs’’ or King’s ancient society. It was observed that these pyramids were built in the beginning of the fourth century or Old kingdom. Although, after a lot of years passed but Egyptian pyramids still retain their majesty and a glimpse over Egyptian glorious past

During the 3rd and 4th centuries, Egyptian kingdom enjoyed the peak of their economical prosperity and stability. They were believed that they were chosen by god to serve between mediators and local folk. They believe that their kings will become the Osiris (god of death). Therefore, it was everybody’s desire to keep the king’s majesty even after his life. That’s why they properly cares their dead bodies, the crops were mummified and the gold vassals, food, fruits, furniture, riches or other every possible livelihood buried with them, in believe that they will need those all afterlife.

The pyramids are actually the monuments and built as the pharaohs’’ burials’. So, deep inside Egyptian pyramids pharaoh would be buried with all of their treasures and every sort of items that they may need to survive afterlife.

In the dynastic Era,the pharaohs’ tombs were called “Mastabas” those were carved by rocks and roofed with rectangular structure. These Mastabas were looks like pyramids with flat roof. The first pyramid was known in the second dynastic at Saqqara. This had known the first step toward pyramid. This structure of architect began the traditional Mastaba. Over the Djoser’s course of kingdom in the 3rd density, Mastaba converted into pyramids of six-step layers at the height of 62 meters that was the tallest building of that time. Djoser prepare his afterlife need in it like courtyards, temples and shrines inside Egyptian pyramid. This kind of stepped pyramid by Djoser became the norm for burial pharaohs

what is inside the pyramids

Pyramids of Giza were considered the royal tombs before and after the first pyramid of Egypt. These tombs were the final resting place for royal families, their relative as well as their loyal servants. These temples were the part of funerary which includes the Queen’s burial temples and mortuary temples for the Egyptian’s daily offerings. 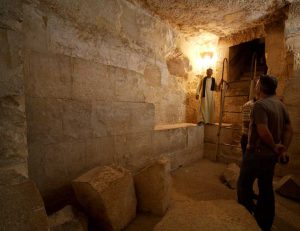 As heard about a lot of treasure and other livelihoods with the king’s burial chamber, that is really complex to find but just great granite and a mummy fixed firmly at floor inside Egyptian pyramid.

Most of the vandals and tomb robbers of ancient and modern times have removed their funeral items, treasure and also most of the bodies from inside Egyptian pyramids. The great pyramids of Egypt are no longer having the same marvelous heights and also robbers have striped of more of its white-limestone. Despite the Egyptian government efforts, almost all of the pyramids were robbed of its treasure. However, still a lot of tourists visit these pyramids and enduring Egypt’s rich glorious past.

Pyramids are continuously built in the fifth and sixth dynasties but the traditional glory has been declined along with this time period as well as their wealth and power. The last pyramid was billed by Pepy, who was the second last emperor of ancient Egypt and he rule over Egypt for nearly 95 years. During the time period of his rule, the prosperity of the old kingdom began dwindling. His pyramid was built at Saqqara which was much shorter (almost 170 feet) and was completed very lately. In the first intermediate period (after Pepy’s death), the strong central government and the glorious royalty of kingdom was collapsed. 12th dynasty known as the middle kingdom period when kings began building the pyramids again but those were not like the same scale as the great pyramids were.

The co-director of scan pyramids “Mehdi Tayoubi” has announced a mysterious discovery of pyramid that pyramid of Giza has a mysterious space inside the depths of it.

He said “The void itself visible inside Egyptian pyramids and can be seen easily, a dotted like a cloud”. Now people could make a tour with friends or family and can see the things which they are unable to see in the past real pyramid.

Still the researcher team improving their technologies to detect more voids inside the pyramids and thinking about the purposes how it may serve.

The researcher are continues working for more discoveries to reveal the mysteries of inside Egyptian pyramids and making way to more explore and more adventure.