Know everything about The Grand Egyptian Museum opening 2020

Since the first news broke, the grand Egyptian museum considered the largest archeological museum in the world. The opening date of this museum was announced for 2022 but currently has been pushed back in coming year of 2020.

“Cairo’s Egyptian grand museum will be the largest museum of the whole world, when it opens” according the CNN’s.

At the first announcement of Grand Egyptian museum in 1992 was somewhat unsatisfying to deal with institutions to showcase the inheritance of ancient Egypt. The chosen location was the central Cairo around the infamous traffic and other issues. An Irish architect Heneghan Peng and archeology head El-Tayeb Abbas addressed with overcrowding visitor issues and admire the enough space of that place to build a mega museum. They said “There is enough space for us to welcome the world and show them the best of Egyptian ancient civilization”.

The ministry hopes that the New Egyptian Grand Museum will be soon the center attraction of the tourists and expected to serve more than 5 million visitors around the world.

The PM. Mostafa Madbouly met with the Egyptian supreme committee and asks for the devise plan about the inauguration opening ceremony of that Egyptian grand museum. Mr. Prime minister Madbouly said that the opening grand Egyptian museum will be the largest celebration in the history of the world and contracted with the major international organizations which have specialization in organizing such major celebrations. They also ask to their committee members for higher coordination with ministries or concern authorities at this project. The New opening Egyptian grand museum immensely direct reflect to the history and glory of their ancient inheritance of kingdom.

The grand Egyptian museum of Giza builds at the slop with a high level of difference from Nile valley to pyramids of Giza. The start up of new grand museum located at the staircase of Nile valley forwarded to the height of Giza. At the main atrium a Ramses statue greets the visitors and a sculpture of gardens around it. This staircase leads tourists from valley level to the height of Giza plateau with lined statues of 87 gods and kings side by side of staircase.

Moving ahead to the plateau, you will find four different galleries reflects four eras of ancient kingdom:

The chronological galleries are based on themes unlike the old grand museum such as eternity, faith, kingship, power and the rest of people (society). While visiting new Egyptian grand museum, visitors led to end up their tour from tall glass windows reflecting between the pyramids of Giza and glory of that place.

What’s in the galleries of Grand Museum

Though, each gallery is a great source to browsing the variety of original and restored artifacts of the magnificent ancient kingdom. There are almost 1500 items related to the boy king’s man Tutankhamun in the old Egyptian museum and more than 5400 in the new grand Egyptian museum gallery. Visitors need enough time to see the entire collection of grand museum such as jewels, gold mask, sarcophagus, chariots and a lot of more.

Egypt’s vast museum, filled treasure and artifacts are somewhat considered “a vanity project” said by some critics. But GEM by itself a great and largest museum in the world which is dedicated to heritage of a single civilization that is Egypt.

When to visit GEM

People from other countries must try to come in September to April and if can avoid to come on Easter or Christmas, must should try. Because at these events there are a great rush of tourists around the world because every tourist interested to visit Egypt during these events, but in mentioned months Egypt give great opportunity for its visitors to visit and pay regards to its magnificent history.

New grand Egyptian museum opening time is from 9am to 5pm and can be facilitate to approach restaurants 24 hours a day. 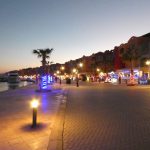 9 Things to Do in HurghadaEgypt tourist Attractions